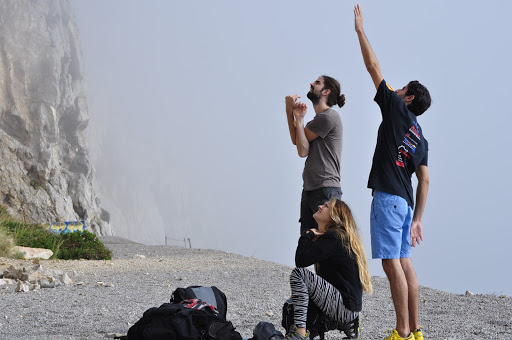 A very foggy Saturday afternoon saw a small team of cragrats head to Pas de la Mala Dona, near Castelldefels, Barcelona. Amongst them were two eager first time lead climbers in Manu and Claus. Both of them have shown a great aptitude for climbing, Claus having done a lot of work on his technique over the past few months and Manu who has a rare natural ability.

And so, after several top roping sessions, it was time for them to lead their first climbs. Pas de la Mala Dona seemed like the perfect venue, close to home, outstanding natural beauty and some very interesting climbing. However on this particular day the fog (which I have never seen in these parts before) had descended and cloaked everything taller than a tree in a thick spooky soup.
This of course did nothing to ease the tension of the intrepid newbies especially as it was difficult to see the tops of the climbs. Fortunately as we went through the safety and anchoring procedures at the foot of the crag the sun did its best to burn as much of the fog away as it could. By the time we were all set to go it had cleared enough to allow a clear inspection of the crag and some pre-climb visualisation of the necessary moves. 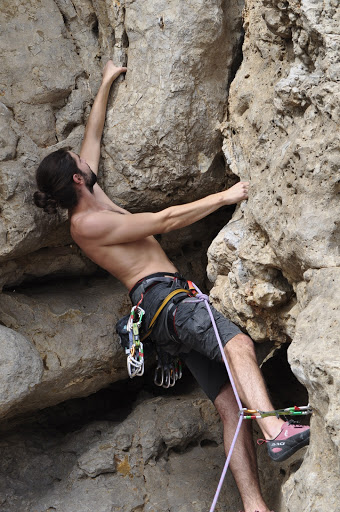 Claus bravely stepped up first and after only a few moves in began to see to huge difference between top roping and leading. However he powered on and by focusing on his breathing and technique he cruised up to the crux. This took a couple of attempts to tame as he fought with the fear of falling that every lead climber experiences but he finally pulled through in glorious fashion.

Next up was Manu who showed how nimble she is by making shot work of the first section and reaching the crux in record time. However she was unable to reach the good holds that Claus’ long arms could find higher up and struggled to pull on the poorer holds within her reach. After a number of valiant attempts her arms were spent and she came down to fight another day. 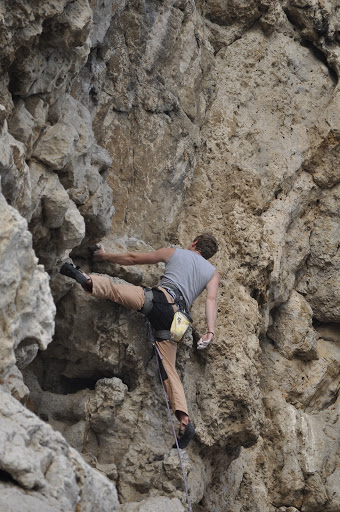 Eugenio and I followed and during my climb a few thoughts began to drift around my mind as after several strenuous moves in a row I began to think that either the grading system in the guide book was very harsh or we were on the wrong route! As I rested under the crux and studied the smooth slab above I could see why Manu and Claus had had so much trouble. All the holds within reach were incredibly poor with only a small ledge for some fingertips followed by a dynamic stretch to a good side pull seeming to be the only option.
I found the correct body position and moved through only to find that even after the crux the next couple of moves leading to the top required rather a lot of technical manoeuvring with sloping holds the only things to pull on. Eventually I reached the top and upon my return to ground I inspected the guidebook.

Indeed we had been wrong! The route we had intended to do was a couple of meters to the left of our trajectory and was a 5+. The route we found ourselves on was Tutti Coloi, a 6b!

We retired for the day in high spirits knowing that we had conquered a lot more than we set out to and a return visit will be very soon in the making. Another top day.