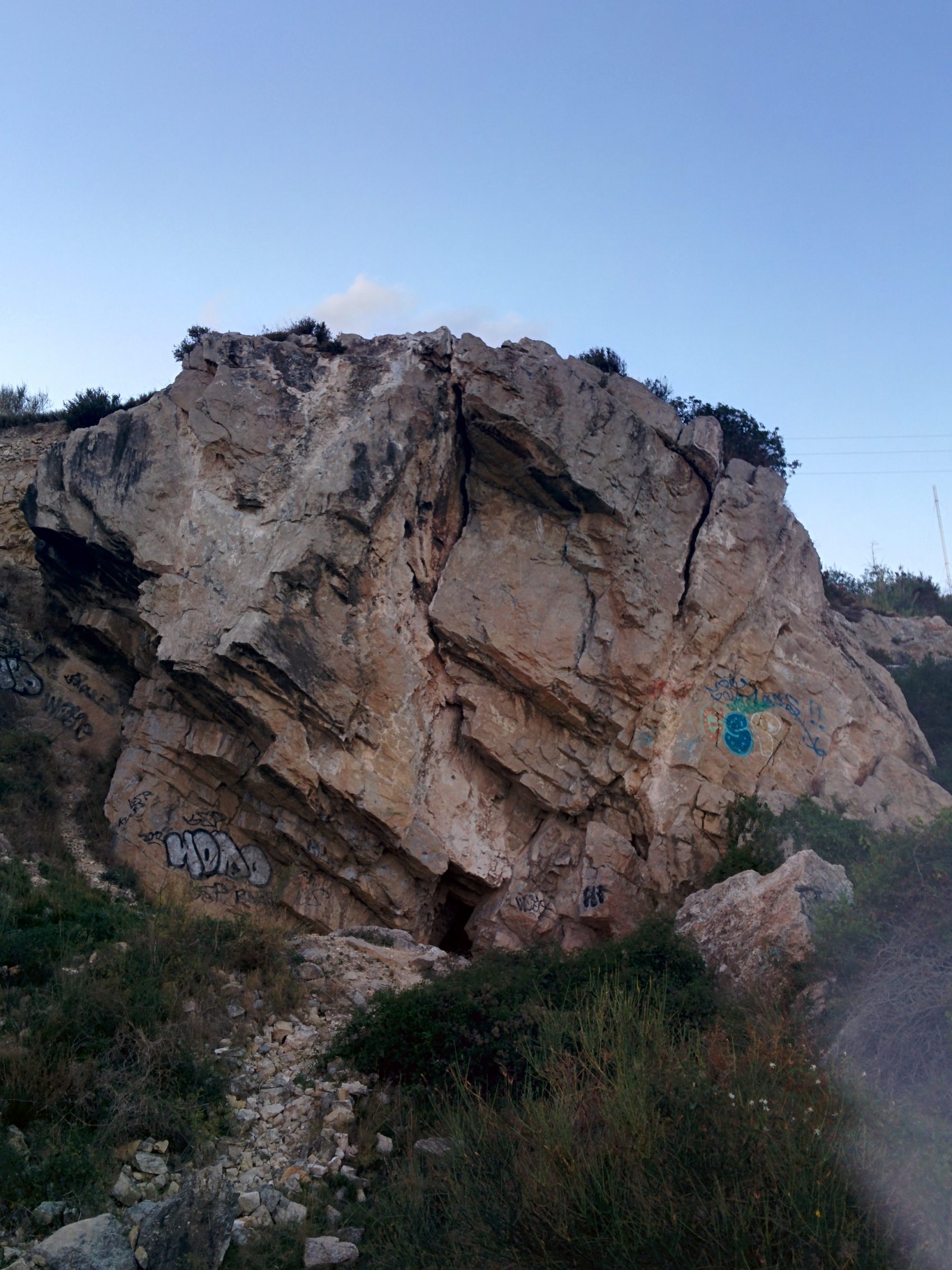 Yesterday Eugenio and I decided to check out a small crag at Montgat. Its proximity from the train station and the promise of a couple of interesting lines made it a perfect Tuesday afternoon venue.

We made our way from Montgat train station toward the venue using a little star on Google maps as our guide. This however, as is often the case with navigating using Google maps, proved a little more complicated than it first appeared. We soon found ourselves lost in a labyrinth of allotments with paths that seemingly led in the right direction only to be stopped by a locked gate or a large (sounding) dog.

Eventually after a few wrong turns we found the correct path and soon after arrived at our destination.

The venue is an interesting one due to the fact that it has a bouldering area tucked away beside the crag which the locals obviously use to train, a cave under the main routes and even a small cactus garden adding to the zen nature of the area.

The crag itself has seven lines on the topo and perhaps another couple more that we observed. On the far left is a large overhang at the base which leads to easier climbing. the routes here are of a high grade due to the technical climbing needed at the start and lack of protection (a bouldering pad is required). Three of the lines tackle the main overhanging block while an couple of easier ones follow the crack that leads up and right from the base.

We began on the crack to warm up (Del Sostret 5c) and found it to be trickier than it looked, especially when placing the quickdraws which required some interesting positions.

After that we turned our attention to the central buttress and aimed for Jesus Barrientos 6c. After a couple of shaky starts early on we decided to setup a top rope, and even with this protection found it difficult for it’s grade.

Undeterred we set our sights on the main event Via del Sostre 7a. After careful consideration of the rather rusty looking bolts and perhaps the knowledge we were both boxing above a weights with this one we top roped it too. Just as well as Eugenio climbed cleanly to the crux only to be forced back by the lack of holds on the lip of the bloc. With the added help of having watched Eugenio make the first attempt I was able to get to the crux without much effort but still sat on  bolt for a rest before attempting the overhang. After much deliberation on the best position to use I managed to lodge my foot inside a crack and use it to leaver my body out to the lip without having to relay on the hand holds. I found two holds that I felt would support me and swung my legs over for a heel hook. It gripped and I was able to haul myself over. Not the most pretty climbing but we got there.

Next up was Via de la Fissura 6b/6b+ which finished left of the main overhang. Eugenio went first and finished bravely as the line relayed heavily on undercuts all the way up the steep wall and required a rather desperate swing over of the left leg in search of a heel hook. Unfortunately the rock was very smooth and the heel hook was more like a heel smear. Pulling himself over he declared himself spent for the day and we contemplated wandering home.

After completing the line myself I felt I had enough energy to attempt the rather bouldery last route Sostre de l’esquerra 6c. I needn’t have bothered though as although I did eventually find the right sequence of moves to haul over the immediate overhang I had to relay on many rests on the rope beforehand. A climb for another day.

We retired for the evening safe in the knowledge that our arms would be aching in the morning and that we had at least paved the way for another trip out to this great little crag.