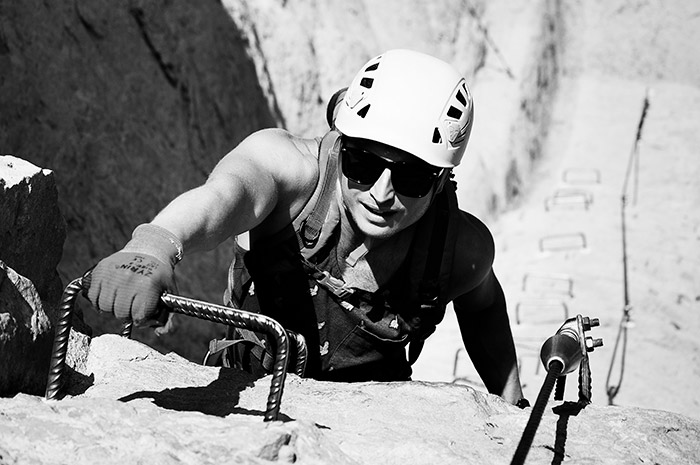 The reasons why and safety in via ferrata

May saw the official closure of the iconic Via Ferrata in Montserrat, La Teresina. Known as one of the most spectacular via ferratas in Catalonia, it will be sorely missed.

The Montserrat Mountain Board decided on the closure for three reasons

1, Firstly the via ferrata has seen a lot of degradation especially in the difficult sections around the woodland areas. The rock has also become unstable around the paths and footholds leading to participants accidentally kicking rocks down the mountain. This problem is compounded by the fact that the via ferrata leads above a populated area of Montserrat. The falling rocks have caused several injuries to people below. 2, Secondly, due to this erosion and also participant underestimating the difficulty of the via ferrata, La Teresina has been responsible for by far the highest number of rescues made by mountain rescue services of Montserrat over recent years. Even in times when it has been closed for refurbishment people have ignored the signs, attempted the ferrata and come into difficulties prompting the Bomberos to rescue them. 3, Finally, the board is looking into the option of reducing the number of via ferratas and climbing routes in Montserrat, both for safety and to meet conservation objectives for the natural park.

So the via ferrata La Teresina is no more. But don’t worry! there are many spectacular via ferratas throughout Catalunya and you can use one of the excellent websites such as RockJumper.com or Deandar.com to research and look for up to date information on the via ferratas in the region.

Please remember when doing this activity to follow the rules of the game:

2: Do not go at night or too late in the day

3: Learn the necessary skills for via ferrata and rescue scenarios

4: Carry the correct equipment, not all ferratas require the same equipment

5: Research the via ferrata before you go

6: Choose a via ferrata that is not beyond your physical level

7: Check the weather before you go

8: When on the via ferrata always have 2 carabiners attached to the safety cable or step

9: Take a sling or cord with a locking carabiner and use as an extra safety sling

10: Leave enough space between yourself and the climber above so that if they fall they will not land on your head

11: Never anchor yourself to the closing end of the safety cable (see video below)

This video was made by the Mosso d’Esquadra after they investigated an accident on the Via Ferrata de Ulldecona that left the climber severely injured. It shows how the climber clipped their safety slings onto the end of the safety cable which was not secured in the rock properly. When they put their weight on the cable it failed and the climber fell 25m.